Pets In Pain: The Link Between Domestic Violence and Animal Abuse

Domestic violence and animal cruelty can intersect with one another. There is a great concern when it comes to domestic violence and the person causing the abuse not only for the adult victim but as well for their children and their animals. For the purpose of this article, we will keep it to adults and animals and in particular women escaping abuse. Most often, Women escaping domestic violence often do not recognize the severity of the abuse until the abuse is done to a child or animal in their household. There are many times a batterer will use and manipulate their partner by abusing their animal. More than often, animal cruelty does not get reported. In divorce proceedings, animals are treated as property, unlike the court’s child and guardianship orders. A victim of domestic violence is often forced to make a decision to choose between leaving and staying for the sake of their pets. Most shelters do not allow pets unless they are service animals.

Why should community members care about this issue? Animals rely on their humans to care for them. The truth is pets and for purposes of this article dogs are like children for many victims of domestic violence. For victims of domestic violence, their dog may be their four legged child and sometimes their protector when the violence starts. They may be the only thing protecting the victim from further abuse that day. Unfortunately, that also means the pet/dog may take the beating if they intervene. In a study conducted by professor Ascione (2007) 86.7% of women in domestic violence shelters reported their pets had been either threatened or abused as a means to gain control of them.  The relationship between a victim of domestic violence and their pet is beyond affection, but rather a shared mutual sense of understanding as they both may share the same sense of fear and suffering. They form a bond similar to mother and child would. In an article titled Behind the Mask: Animal Abuse Perpetration as an indicator of risk for first responders to domestic violence a study was conducted on the correlation of animal abuse and domestic violence. The study found a strong correlation between the perpetrator of domestic violence and history of abusing pets. Furthermore Campbell’s (2021) study revealed the human victims in the home reported they experienced forced sex, strangulation, including threatened or harmed by a weapon by the perpetrator. 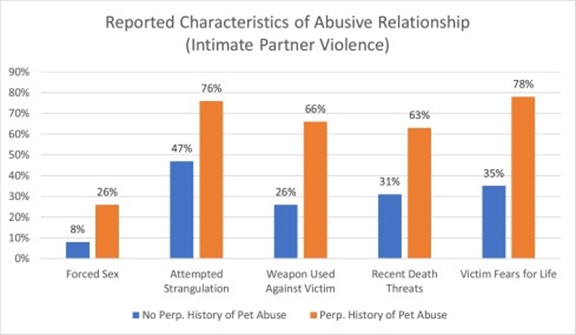 There should be tools in place for greater protections for dogs and animal cruelty used to screen other household members who could also be experiencing abuse themselves. The general public health and well-being is affected by this issue as people who abuse animals often are involved in criminal activities or commit other crimes.  Stricter penalties for animal abuse must be implemented. Hays community can start by educating the public, and public servants such as peace officers on risk factors implicating there may be other abuse happening in the home affecting both humans and their pets. According to the Humane Society, there are currently 13 states that allow courts that include pets in restraining orders for domestic violence. Reporting animal abuse can aid authorities stop violent crimes or other criminal activities the perpetrator may also be involved. Animal abuse is an issue not only affecting the victims of domestic violence, but all community members.

Campbell, A. M. (2021, March 11). Behind the Mask: Animal abuse Perpetration as an indicator of risk for first responders to domestic violence. Forensic Science International: Animals and Environments. Retrieved September 15, 2021, from https://www.sciencedirect.com/science/article/pii/S2666937421000020?via%3Dihub#bib0055.

Updahya, V. (2014). The Abuse of Animals as a Method of Domestic Violence: The Need for Criminalization. Retrieved from https://scholarlycommons.law.emory.edu/elj/vol63/iss5/3